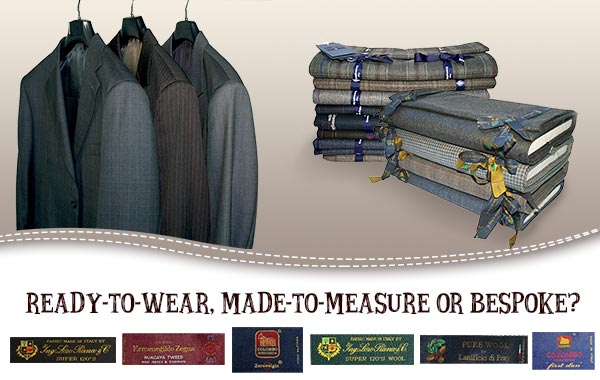 RTW, MTM, bespoke or tailored…mmmm…These abbreviations seem very fashion and exclusive. But what is the difference between ready-to-wear, made-to-measure and bespoke?

What is Ready-to-wear (RTW ). It is a mass-producted wear. Style and cut is already chosen by designer. Usually brands give you numerous models and intersting offers. You can try suit in shop and to take it at home immediately. You can buy a good tailleur for 500 euro by Angelico or by Cerruti, italian factories that produce fabrics and men’s cloth.
A lot of RTW suitmakers are very attentive with quality of fabric, finishing and details (hand-sewn buttonholes or hand-padded chest) that can be appreciated. You must only find the right brand.
Unfortunately, RTW can fit well in some areas and may be short or long, loose or tight in others. A suit is built from the shoulders. If the shoulders are constructed well, the rest will follow. Slight problems can be modifed. Ready-to-wear suit altered by a good tailor fits as well as a Made-to-measure of the same price.

What is Made-to -measure (MTM). It is like RTW but made with your personal dimensions (neck, shoulders, chest, arms, back, waist). The MTM wardrobe of Ermenegildo Zegna, for example, includes not only formal but also casual and outwear. At first, you visit the boutique and choose fabric (it is possible to find also an exclusive fabrics. Ermenegildo Zegna offers their iconic fabrics as Trofeo, High Performance, 15milmil15.).
Then you decide about cut and details (type of collar, cuffs, buttons). The salesman takes your personal dimensions and you will receive the suit after some weeks. Often price is not much more than RTW. But sometimes the high quality levels are like bespoke. But will it fit perfectly? You must remember that a salesman is not a tailor.

What is Bespoke or Tailored.
Bespoke suit is built for you. Your individual garment. Any style, any material and handmade by tailor. How many fabric do you need? For men’s casual jacket we suggest 2,2 -2,5 mt. For men’s tailleur 3,5 mt. Fabric cut comes with tag that will be put on your garment. You discuss with your tailor about ideas. A good tailor with experience helps to client with choice of style. The tailor takes your measurements with a lot of details. After 2-3 fittings, each a few weeks apart, you suit will be ready. It must fit perfectly and be more comfortable. But it takes time and it is expensive.

All what you need is…
Really, what do you need? If you are in the search of fashion design and famous tag for reasonable price, take Ready-to-wear. If you want to personalise your suit, take Made-to-measure. If you wish a comfort fit and a highest quality, choose Bespoke

Baby Cashmere is extremely rare and precious and…more expensive. It is obtained from baby goats.

The fibre is gathered by combing procedure, only once in a goat’s life (from three to twelve months old)
This cashmere is available in limited quantities: 80 grams of soft down from one baby goat (adult goat prodices 250 grams). After deahiring coarser outer fibres, is reduced to 30-40 usable grams.

As a result – incredible lightness and softness.

But not all can notice the difference between traditional cashmere and baby cashmere. Often only a true expert can understand it.
It is good to point out that the term baby cashmere is sometimes used for cashmere wool that has not been woven or processed before. In this case, the wool can come from an adult cashmere goat.

In order to ensure that you are buying genuine baby cashmere, you should strictly look at reputed cashmere manufacturers such as Loro Piana that was the first to develop baby cashmere and holds the trademark for the name.

The women wear heels because they flex the calve, tightened the thigh, and tend to lift her buttocks. All of these in combination make an attractive woman even more alluring to men, accentuate a woman’s sexuality, a feminine look. These are things that men find seductive in women.
Since most women want to conque men, or at least enjoy looking as attractive as possible, the practice of wearing high heels is entirely based on very human desire to attract the opposite sex. And men in their own way do the same.

Many men aren’t that tall, they are shorter than their woman. So some men wear elevator shoes (with a wedge-shaped piece hidden in the shoe to make them taller). While men wanting to add a few extra inches in the height department is nothing new, it seems a “subtle” lift just won’t do anymore. The passion for heels is more about function than style.
But the new wave of men turning to high heels has nothing to do with height. Most of those who buy cuban heels are actually pretty tall already. Besides being taller, there are men who wear heels for aesthetics reasons. These men as women are choosing heels…to feel good!

Men should be allowed to wear heels since it was originally and historically made for them. In 17th century men wore them as a sign of high status. The first high heels also were worn by Persian warriors on horseback. High heels had a functionality aside from fashion, it was used to help get a step on the horse more easily. In Dallas, Texas men in cowboy boots with two or three-inch heels are the norm. This is culturally acceptable. The same heel in a man’s loafer would not be acceptable, socially. High heels that are designed for men not the same kinds women wear.
Why men can’t wear heels? For a number of reasons: it’s not “manly”, they don’t look good in them, heels are too painful for them, they can’t walk in them, they’re afraid of what others will say about them. But some brave men already tried a pair of boots with a big chunky heel and have got a lot more attention from the ladies. They discovered stylish look! Even though men have the freedom to do so always, can wear high heels – they don’t. The reason is convention, tradition, the current state of the fashion world. It is not the fashion?

Fashion/fitting with society is extremely important for humans. Due to evolution of styling for women, all kind of shoes from narrow to wide, low to high, basic to exciting, plain to colourful came into existence and acceptance. Women were supposed to experiment and try n look different and more fashionable.
While men were contained with simple colorless shoes which are more functional than fashionable. Men had been ignored by the fashion industry. Without going into all the theories why this might be the case, the end result is that our society associates solid, stable, functional clothing styles with men.
Only recently the fashion industry has turned their focus on men. This became the accepted norm, with now changing trends, more block and chucky heels are available for men and soon, may be, men will have stilletos in their shoe section as well. If it looks good, and I look good in it, I wear it? Do i limit myself based on some socially-constructed idea of what men and women are supposed to do and wear?

Learning to walk, run and do usual work in heels will also evolve and hence, next generation of men would be seen wearing all kind of fashionable items including heels and skirts and dresses and makeup.

Grand passion for shoes and grand craftsmanship. Salvatore Ferragamo was working for some of the most famous feet in Hollywood, so was known as the “shoemaker to the stars”.

The year 1947 marked the launch of Ferragamo’s Invisible Sandals. Made of water-colored nylon thread, the shoes took some getting used to but resulted in Ferragamo becoming the first footwear designer to win Neiman Marcus Prize at the Fashion Oscars. He didn’t stop there though.

And in 1956, returning from a trip to Australia, he launched the 18 kt gold sandals with their patented metal sole.

Ferragamo’s relationship with the cinema never ended. When Marilyn Monroe declared “I don’t know who invented high heels but all women owe him a lot,” she was probably referring to Ferragamo, who was the creator of the famous stiletto heels with metal reinforcements that she used to wear and which he designed especially for the star. Audrey Hepburn inspired him to design a ballet pump that eventually came to epitomise the style of the beautiful actress. The list of stars who wore Ferragamo is a long one including Greta Garbo, Ava Gardner, Sophia Lauren and Lauren Bacall.

Ferragamo was unique in that he was not only interested creative beautiful shoes. In an era when many women squeezed their feet into the smallest size bearable, Ferragamo studied the anatomy of the foot, insisting that “high fashion and comfort are not incompatible.”

And now in collezione 2016 we can discover Salvatore Ferragamo new silk foulard in an elaborate shoes motif. Real passion for shoes!

Items ranging from household, clothing, from fabrics pearl house to shoes, to the jewelry.

Feedback on Our eBay Store

This website uses cookies to improve your experience while you navigate through the website. Out of these, the cookies that are categorized as necessary are stored on your browser as they are essential for the working of basic functionalities of the website. We also use third-party cookies that help us analyze and understand how you use this website. These cookies will be stored in your browser only with your consent. You also have the option to opt-out of these cookies. But opting out of some of these cookies may affect your browsing experience.
Necessary Always Enabled
Necessary cookies are absolutely essential for the website to function properly. This category only includes cookies that ensures basic functionalities and security features of the website. These cookies do not store any personal information.
Non-necessary
Any cookies that may not be particularly necessary for the website to function and is used specifically to collect user personal data via analytics, ads, other embedded contents are termed as non-necessary cookies. It is mandatory to procure user consent prior to running these cookies on your website.
SAVE & ACCEPT